It’s not that I didn’t know the word previously, but this month I’ve begun to learn what it means.  It has become a three dimensional reality for me, I’ve seen some of the scars of the horrors it leads to.

I was very privileged to be part of a pilgrimage to Auschwitz in January 2017.

The two concentration camps at Auschwitz and Birkenhau, have been preserved sensitively as historical sites, with some prison buildings at CampA at Auschwitz also re-ordered as a museum.  There’s no gaudy plastic or posters, there’s a simplicity and honour of the memories the place holds.  Those memories themselves are enough to impact the many visitors.  I agree with the Archbishop of Canterbury and all those who simply reflect: ‘everyone should go to Auschwitz’.

To visit the camps, to see the very cells the prisoners were kept and killed in, the execution wall, the display of empty tins of zyklon B,

and to see the crushed mesh of  glasses, and piles of unlaced shoes, stolen from their owners, is to be saturated by the memories of human cruelty to humans.  (to steal someone’s shoes or glasses is itself barbarically disempowering)
The historical evidence of that cruelty is overwhelming.  We each respond emotionally to different things, for me personally the room full of recovered human hair and the wall of photos of prisoners were two of the memories which landed the most deeply, I had to stand still just to recover my breath.

In the museum I had to choose to remember the humanity amidst the static displays, which is why the hair and the photos reached deepest for me, this was my point of contact with the humans who had been treated so cruelly.  The other place where my heart was most wrenched by the reality was in a hut in Birkenhau, when I leant on the very beds which women and children had slept in, bare boards with 8 people per bed.  I touched the very wood they had slept on. 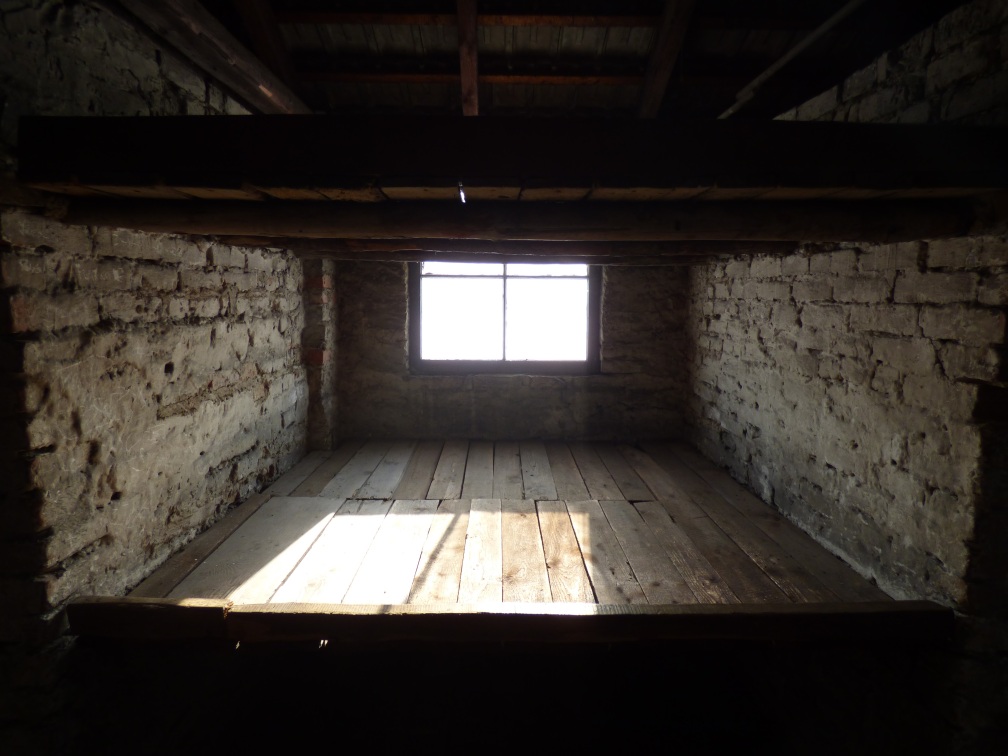 Story after story, display after display, and photo after photo exposed the way which the SS soldiers treated the prisoners, it was a conscious effort to realise these very things happened on this very ground, in these very rooms, within living memory.  Today, the Auschwitz museum has posted photos online of survivors returning to that very place on Holocaust Memorial Day.  The scene so familiar, the same sun pushing through the mist and the same snow I walked past, I count it a privilege to be linked in this way with them.

Throughout the day, as I let myself be carried by this flood of history, and engage with the reality, my mind kept returning to the same question: ‘How?’

The museum contains powerful displays, reminders and evidence, but to be there is to engage the imagination and realise not long ago, these victims were real people. Not merely living, breathing, washing in those sinks, using those loos, and all too insufficiently eating, but talking, relating, imagining, seeking to understand, trying to survive, holding onto love.

This process of imagining the reality of what was going on, was to ask a thousand questions.

Did they wash? How did they cope with the biting cold? What did it smell like? How did they relate to one another?  My imaginings led me to consider their powerlessness, they were stripped of everything.  Their clothes, their hair, all possessions, even their gold teeth.  Victor Frankl’s stunning book ‘Man’s search for meaning’ talks of the horror of being stripped of the manuscript of the book he was writing, his life’s work.  How he had to internalise what he had written, inside him, to a place they could not steal it from.

In order to manage crowds of prisoners, they found mechanical ways to control the prisoners, enabling them to survive in order to exploit them for work, but caring not if they died, because they had thousands more to replace them.  Once their possessions, hair and futures had been stolen, they could only treat them like machines, feeding them the very minimum food as fuel, to keep them working.

The first stage of dehumanising them, was to render them powerless.  As I attempted to engage in that sense of powerlessness, I recognised that when powerless we become entirely reliant upon the mercy of others.  In the SS guards, they found no mercy.

In this, the SS guards themselves had also surrendered part of their power.  They had to let go of their own capacity for mercy.  They had to convince themselves that these people were not people.  I am still shocked that dehumanising was powerful enough to overcome the instinct of mercy.

There are rare stories of mercy.  In the account of the Franciscan Friar Maximilian Kolbe, we hear how when 3 prisoners disappeared, the guards chose to starve 10 to death, chosen at random to be an example.  When one prisoner cried out ‘what about my wife and family?’, Kolbe offered to take his place and was duly starved for two weeks and finally murdered by lethal injection when starvation proved insufficient.  Amidst the horror and heroism of the story, I was surprised to hear of even that glimmer of mercy by the guard in responding to Kolbe’s request and granting the swap.   That small act of mercy stood out as a rare exception to the thousands of times the guards wouldn’t even listen to the pleas of their victims.

Wave after wave of evidence of merciless dehumanising.  In every photo, story and display the evidence is there that the guards ceased to see the victims as human beings, it is the only explanation I can find of how they could manage this. Part of this was that they stripped them, not just of possessions, relationships, hair and teeth, but of their names.  Survivors have shared the agony of being reduced to a number, all learning, qualifications, status and dignity, deleted, all part of the attempt to dehumanise.

To such a tiny extent I was invited to engage with the memory of horror which results from dehumanising.  I’ve come to a simple conclusion: to dehumanise is evil.

One theological reflection shared by Rev.Sam Wells on the trip was that evil is the systematic justifying of wrong actions as though they were right.  To paint thoughts or actions in conflict with God’s kingdom, as something which is morally acceptable.  By this definition, to dehumanise is evil.

Humans were created in God’s image, endowed with incredible honour by our loving God and described as ‘very good’.  Separation, rebellion and sin marred our creation and has led to untold suffering and division.  Jesus came to reunite and the New Testament passionately declares the re-establishment of dignity and honour of all people in God’s sight.  Bible passages such as Acts 2v17, Galatians 3v28, Ephesians 2v15 and Colossians 3v11 unequivocally declare God’s intention to restore humanity as equally loved.

Simple theology:  God looks on each human being as someone he has created and loves.  To dehumanise another is to disagree with God.

Facing up to the horrific results of dehumanising, raises many questions for me now.

How can we avoid even the slightest glimmer of dehumanising in the way we live?

We live in a vast complex world.  We share this planet, a gift from God, our home, with 7 billion other humans, each created and loved by God.  We can’t know everyone else, we will only relate to a minute proportion of these ‘others’ in our lifetime, global communications mean we will interact with far more than any previous generation in history.

Understandably we mentally clump and categorise others and consciously or subconsciously we use labels to categorise. This can enable cultural understanding, it can cause destruction and everything in between.  The worst categorising and labelling I have ever seen was the photos on the wall of Auschwitz.  Each prisoner was given a number and a coloured triangle to denote whether they were Polish, Russian, Romany, gay or Jewish (who were given a double triangle, the star of David).  Some triangles meant you were fed and survived, others meant you were deceptively led to the gas chambers.

Categorising and labelling is probably inevitable and so we have to be vigilant in one thing and that is to ensure labelling never leads to dehumanising.   There have been occasions in my life when God has rebuked me sternly by reminding me that my attitudes and actions impact his beloved children.  In every decision we make which impacts others, we remember that people are created and loved.   In every relationship and connection we make, we treat others as people not according to the labels we might have mentally put on them.

I went through a painful time in a close friendship.  Reconciliation was only possible when I recognised that I was relating not to my friend, but to a limited pigeon-holed version of him created in my imagination.  When we next met, I listened long enough to let him be himself and was able to demolish that false labelled version.  I realised I too have the capacity to dehumanise in almost every form of relationship and it could have been so destructive to a precious friendship.

The Holocaust arose in a political and ethical maelstrom, it developed unchallenged by a passive or petrified church.  The murder of millions of Jews was termed ‘the final solution’ by the Nazis because they had developed a mindset which justified dehumanising.

My reflection from engaging with dehumanising, is simply this.  Prize mercy.

God has given us the power to show mercy to others.  To treat them with honour, dignity and to empower them, not strip them of power.  In the kingdom of God, power is given in order to be given away, not to control, never to exploit.

That power he has given us, is called mercy, it’s a gift we’ve received and its a gift we must give to others.

[Photos supplied by Ian Dyble and others, with thanks, copyright is theirs.]

I have posted further thoughts on my trip here

2 thoughts on “Dehumanising: (A reflection on Auschwitz)”